Welcome/Welcome Back
photography
95 x 95 cm each 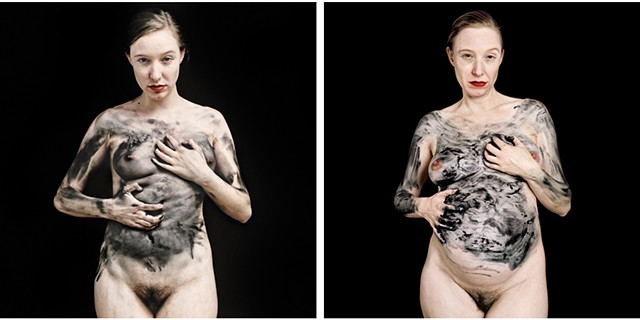 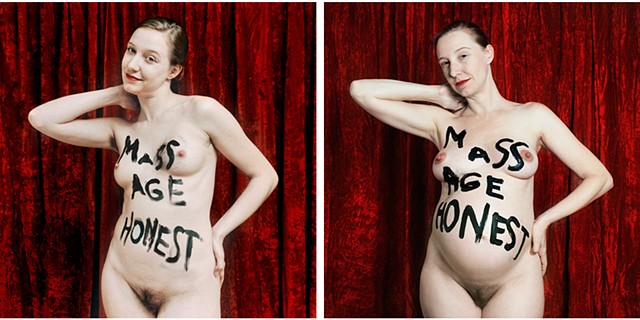 The original series, Welcome (1996), began as an identity quest. As a young artist seeking to define and assert myself in New York City, I remember feeling an utter lack of agency. I knew I existed because people reacted to me; they saw, if not exactly what I would recognize as me, someone. In real life, I seemed to function much like a photograph: an object upon whom others placed meaning, a projection of others’ egos and ideas. I wondered if by turning this objectifying instrument, the camera, upon myself and by giving myself a space to communicate with it—and through it with others—I might be able to discern and define an identity that would be authentically mine. I decided to make a visual document of this process.

Photography’s immediacy and its very vocabulary–notably exposure’s multiple meanings, including both the active connotation “to show” and the more passive “to be seen”–as well as its history with the female body, drew me to it. Turning the camera on myself, I could be both the performing subject and the observing eye. This double role, coupled with the serial format, made a deconstruction into elements possible–a way to identify and separate the different narratives of an inner dialog– reflecting the idea that what we refer to as identity, is neither fixed, nor monolithic, but multi-faceted and contextually fluctuating. A kind of coming of age story developed that naturally separated into two distinct types of performances, what I describe as exterior and interior expressions.

As the aim was literally to strip myself down to the bare elements, they are naked portraits aided only by simple props, gestures, and text. I wanted to get beyond the body and redefine it in a way that would render it not naked and exposed––nor idealized––but simply natural that it be seen.

As a feminist and a humanist, I wanted to avoid the objectification that too frequently characterizes the photographed subject. In these life-size photographs hung at eye level, I sought a direct engagement with the viewer. The gaze is returned with the intent to provoke a kind of conversation that is also a declaration: “I am.” Collectively, these enactments tell a personal story, one that aspires to transcend the individual narrative to consider more broadly how the dynamics between public and private and subject and object, affect identity and its perception. As I wrote at the time of the original series, I wanted “to make work that screams I so loudly that other I’s turn at the sound of their own names.”

Fifteen years later, as a 40-something pregnant mom in Paris, I was curious to see what impact time, the implication of motherhood, and other circumstances had on this sense of identity. By imitating the original photographs as closely as possible, the goal was to record not only physical changes, but especially the more nuanced and elusive psychological evolution. From a broader cultural perspective, I wanted to force a conversation about the female body’s particular capacity for radical changes in perception. This latter group of images, called Welcome/Welcome Back, are not meant to stand alone, but attain their meaning as part of a diptych, paired with their original inspiration.

The resulting work consists of 32 life-size photographs–16 time-spanning portrait pairs exhibited side by side. Presented is a selection from the series.